“To eat or not to eat… that is the question.” Who wrote that line…? While you’re pondering over that, let’s accustom ourselves to the caterpillar’s energy source of choice.

If you like to use The Very Hungry Caterpillar as your encyclopedic source on all things caterpillar (it’s cool, my feelings aren’t hurt) then you may be under the impression that caterpillars dine on cakes and sausages. Hold that image in your head because the reality is that caterpillars aren’t the sausage connoisseurs you hoped they’d be. Their first meal is their own eggshell (a disposable packaging engineer’s dream). After the shell has been devoured, it’s onto their host plant (note to plants, don’t invite caterpillars for dinner). 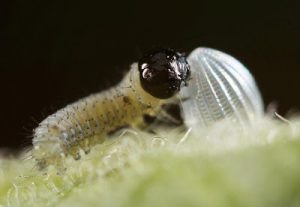 Some butterflies (an adorable creature) lay their eggs on one or a few very “lucky” plant species. Others, like to target an entire family of plants when they lay their eggs (like when you’re playing paintball and you have the entire opposing team cornered, but this isn’t as messy). The Cabbage White Butterfly (not so adorable to farmers) likes to cushion its eggs on the entire brassica family. That means mama cabbage and uncle kale and aunt broccoli, and any third edible green cousin, may find amongst its leaves a butterfly egg and then a caterpillar and then…the plant loses all its leaves. Eat your kale, kids before the very hungry caterpillar does it for you!

The Monarch butterfly, on the other hand, is extremely picky. The caterpillars of this future butterfly need very specific plants. That fussy Monarch looks for milkweeds (a.k.a cotton bush, a.k.a swan plants) either from genus Asclepias or Gomphocarpus because these and only these plants have something special in their leaves – poison (cardioactive steroids, not sold over the counter). These toxins make the plants completely inedible, to most animals, except that the caterpillar (of the fussy Monarch) eats them. Why, oh why? See, the caterpillar is after the poison, because instead of digesting it and getting sick or dropping dead, the caterpillar stores the poison in its body. This make the caterpillar itself poisonous to praying birds and other predators (I revoke my comment about them being finicky fuss pots, this is high-tech survivor stuff). The poison is passed on to the chrysalis and then the adult butterfly stores the bitter cargo in its wings. The Monarch caterpillars dresses in a bright stripy coat (think zebra or a circus themed dress-up party) to warn predators to stay away (a public service announcement, which is more than I’d do for my enemies).

Let’s meet another caterpillar that sustains itself in somewhat unusual ways.

If your menu doesn’t include your own egg or the greenery you live on, which is most caterpillars, then you may be the Hawaiian Inch Worm caterpillar. These very, very hungry caterpillars have evolved with sharp claws (they refuse manicures) which they use when pouncing on their pray. They pretend to be a stick (2 stars for originality), hanging out, waiting for the pool boy to bring them towels until…. Dinner (a.k.a an unsuspecting bug) comes crawling along and gets butchered by the caterpillar’s powerful jaw. Video here.  Heads up, grown ups, it could be a little bit scary to some kids.

After all that, anyone wants some cakes and sausages?

News From the Farm